Angels Walk Among Us

This being Christmas Eve, I find myself thinking about angels.  Imagine how cool it would be to be an angel.  I am specifically thinking about the kind that walk the earth.

Last weekend, we watched The Bishop’s Wife (1947). In it, Cary Grant plays Dudley, an angel put on earth to help out a couple.  Spoiler alert: Dudley achieves what he set out to do.  But the fun part of the story for me is how Dudley just steps into traffic to help a blind man cross the street and cars screech to a stop.  Then he rescues a baby in a run-away pram.  He wanders around helping everyone and anyone in need.  Dudley is cheerful and always in control.

Then, in It’s a Wonderful Life, you have Clarence who is sent down to earth to help George Bailey regain his will to live.  Again, spoiler alert, Clarence gets the job done.

Now, I don’t know if actual angels walk the earth and if so, if I’ve ever met one.  But what I do know for certain is that there are people who around this time of year, play angels.  I saw one man on TV who likes to don a Santa hat and then give $100 bills out to persons in need.  This year, he took an extra step and gave 3-4 $100 bills to various police officers in Houston for them to pass along to community members still in great need after the hurricane.  Very cool.  Also this year, a couple bought a bunch of gift cards in Walmart then went throughout the store distributing them to customers.  Sounds like a lot of fun.

Think about how interesting/fulfilling/challenging it would be to wake up every day saying I am going to be an angel today – whatever that means in whatever environment you find yourself in.  You commute via train; you give up your seat to somebody.  You see somebody carrying heavy packages; you help them to wherever they are going.  You know you have a neighbor living alone; you stop by for tea and a chat in the afternoon.

Now, this is not meant to be a Christmas Eve lecture.  Rather, just an interesting lens with which to look at life.  You have power just like Dudley and Clarence, whether you are aware of it or not, whether you choose to wield it or not.  Now I just made you aware. 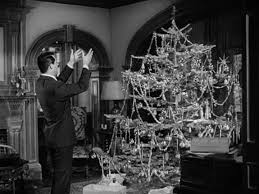 Posted by 4CallingBirds at 7:45 PM