The Future Is Now

First off, have you ever noticed that any time somebody creates a movie about “the future”, the environment is very high-tech, usually in space, and/or on Earth, and with very depleted resources. Now I know somebody right now is reading this and saying what about Avatar? Well, I am not going to include Avatar because it is on Pandora, ad entirely different planet with lots of animals running around that do not at all look like members of our animal kingdom, but I digress…

Starting with the tech thing: it is interesting to me that even movies from close to 40 years ago (Blade Runner, Back to the Future, etc) all seem to have envisioned humans interacting with and often relying on technology – technology that is far more advanced than the tech of that day.  Back then, people knew about computers, and some used them in limited capacity, but they were nowhere near as prevalent as they are today – literally in one’s hand near constantly.  Why did we think that we needed these things? Why did we think they would be better/more advanced/enabling than how we were already functioning? And for that matter, before computers were invented, how did people see the future as being?

Now the environment angle: I feel like I never see futuristic movies where nature is thriving, with humans living in increasing harmony with the world around them.  The landscape is usually bleak (a la Mad Max or The Hunger Games) with resources in short supply. This may seem like an obvious movie background nowadays with constant talk about Climate Change. But, again, like 40 years ago the concept was not common knowledge (nor was it the reality it now is) and yet, movies were being made about a future with a depleted planet, often with people resorting to going to Outer Space to find a new, vibrant home.

I feel like these two movie trends are very much interrelated. It will be interesting to see if the trends take a turn as they increasingly become reality. Would be interested in hearing people’s thoughts! 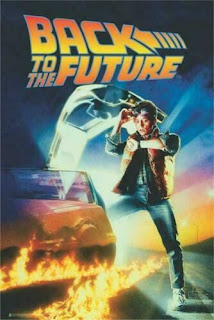 Posted by 4CallingBirds at 3:09 PM