When December rolls around, the music in my house turns to holiday tunes morning, noon and night.


Feliz Navidad?  Love it.
Rockin’ Around the Christmas Tree?  You bet.
Grandma Got Run Over By A Reindeer?  One of our favorites.


Which brings me to the subject of this blog.  My Favorite Things.


We’re big fans of “The Sound Of Music” and even the song, My Favorite Things.  But who decided that this was a Christmas song?!?  I mean, really.  I’d like to meet him or her.


This started off as a joke a few years ago with my wife and kids.  Anytime My Favorite Things would play during the month of December, one of us was bound to retort – “That’s not a Christmas song!”


But now it has ceased to be funny.  If that song plays during the holidays, we change the channel.  It has nothing to do with Christmas.


I took to the internet in my efforts to understand how this perfectly lovely song was shoe-horned into becoming a Christmas song.  The best I could find on Wikipedia was that the “wintertime imagery of the lyrics has made My Favorite Things a popular selection during the Christmas Holiday season.”  Thanks, Wikipedia.  That was helpful.


To my surprise, I learned that since 1964, My Favorite Things has been recorded on 34 different Christmas albums by artists as wide-ranging as Diana Ross & The Supremes, Andy Williams, Barbra Streisand, Herb Alpert, Kenny Rogers, Luther Vandross, Chicago, Glee and Mary K. Blige.  No wonder it is virtually impossible to avoid the 34 versions of My Favorite Things during the holidays.


How about if we examine the lyrics:


OK.  First verse down.  Raindrops, roses, kittens?  None of these say “holidays” to me.  They don’t even say “winter”. The “packages” aren’t Christmas gifts – they’re in brown paper, not festive wrapping.  The only thing remotely wintery is a reference to some mittens.  I’m not feeling it.  Are you?

Let’s see if there’s anything in the second verse we can cling to.  Apple streudel? Schnitzel?  The descriptions sure are making me hungry, but they don’t conjure any holiday images for me.  Doorbells?  I must admit I don’t really get that one.  OK, at least there’s a reference to “sleigh bells”.  Maybe we’re on to something.

Third verse brings in girls in white dresses.  Don’t they say you shouldn’t wear white after Labor Day??  Then the verse mentions “snowflakes” and “silver white winters” -- but only in the context of them melting into springs.  Couple that with the “raindrops” in the first verse and I’ve moved straight through spring and into April showers.


Do you get a lot of bee stings in December?  Didn’t think so.  And do they make you feel all warm and festive?  I’m just saying.


So let’s recap:  If you’re a “glass half full” kind of person, you’ll count mittens, sleigh bells, snowflakes and winters in the “Of course it’s a Christmas song, you idiot” category.  But you’d have to completely ignore the raindrops, roses, kittens, ponies, geese, melting winters and those troublesome bees.


How about if we just agree to disagree? 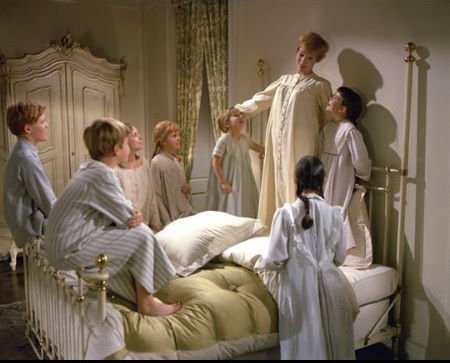 Posted by 4CallingBirds at 7:41 PM