Today would have been my father’s 88th birthday.  It’s hard for me to wrap my head around him being that old.  He lost his fight with cancer when he was just 56 years old – so my memories of him are of him at that age or younger.

I’m sure he would have slowed down considerably at 88.  But in my mind, he would still enjoy sitting on the sofa with a good book and a glass of scotch.  My Dad was an avid reader – often reading 2 books simultaneously.  I’ve tried this and it was not so easy to do.  My father had a lot of authors he liked – Stephen King, Ken Follet, Robert Ludlum – he read a lot of popular fiction with a leaning toward mysteries and thrillers.

I credit my father with giving me my very first Stephen King book to read.  It was “The Dead Zone”.  He gave me a brief synopsis of the plot and told me to give it a try.  “Read the first 20-30 pages” he told me.  I did and I was hooked for life.

After “The Dead Zone”, I continued to read Stephen King.  And read and read and read – and I'm still reading today.  That guy is majorly prolific.  I think I’ve pretty much read everything Stephen King has published including his non-fiction works.  My kids know if Stephen King just published something new, they have an easy birthday or Father’s Day gift for me.

Sadly, my father was in the middle of reading “The Dark Half” by Stephen King, when he passed away.  I found the book by his bedside with a bookmark still in it.  I still have that book as part of my collection.  Even after reading “The Dark Half” myself, I still kept Dad’s bookmark in the book on his page.  Over the years and through several moves, the book and bookmark remained.  At some point, I decided to use Dad’s bookmark for other Stephen King books I was reading.  In my mind, this way Dad was sharing in the newest Stephen King masterpiece with me.

I’ve got a new Stephen King book called “Later” sitting in my nightstand on deck for when I finish my current read.  Looking forward to sharing it with you, Dad. 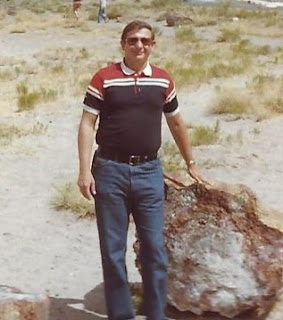 Posted by 4CallingBirds at 6:16 PM