Tonight’s dinner was fettuccini and Bolognese sauce.  It was simple, warm, hearty and delicious. Served with a salad and some garlic bread, it was a delicious meal.

Pasta Bolognese ensures that you have equal distribution of the meatballs by skipping the “ball” part all together.  With little bits of meat spread evenly throughout the sauce, you never have to worry about coming up short with that last bite of spaghetti and no meatball.

I turned to thinking, how did those fine folks in Bologna come up with this fine recipe?  The simplest explanation is that someone probably made sauce with meatballs but the meatballs cooked to long and fell apart in the sauce.  Instead of big thick balls of meat, they had sauce with deconstructed meatballs.  Probably considered the dish a disaster.  Did they feed it to the family or toss it out and went out to dinner instead?  Maybe they thought about tossing it out and then someone tasted it.  Eureka!  A new delicacy was born.

Interestingly, it seems like the origin of this dish (and its association with Bologna) is in question.  Considering it is often made with tomatoes and a tomato ragu, it is considered more typical of a dish from the tomato growing region of Naples rather than Bologna.  Who knows?  Those Bolognese people took credit for it and got some great branding out of it.  Now people all over the world go to Bolognese to eat this dish.

I never realized how popular it was.  I found this on the interweb:

Given the popularity of this dish, I’m expecting this blog entry to go viral.  I should have a million views by morning and my own cooking show by Wednesday.  Friday the latest.

When that happens you can all say you knew me when….

Thanks for your support. I won’t forget you when I make it big. 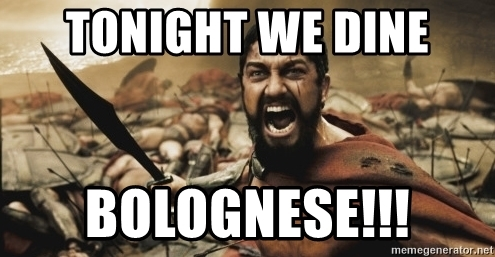 Posted by 4CallingBirds at 6:10 PM