May The Force Be With You

Tomorrow’s a big day!  My family and I are going to see an early screening of The Last Jedi, the 8th “Episode” of Star Wars.  I have to admit that I’m pretty jazzed to see it.  Star Wars is one of those movie franchises that really excites me.  Each time a new film starts, we see the words “Star Wars”, trumpets blare and we pull back onto the deep space sky with a million stars.  Without fail, my pulse quickens and I get a little lump in my throat.  In that instant, I’m the 11 year old kid who saw the first Star Wars in 1977 not really knowing what to expect, but, like so many other 11 year olds at the time, was completely blown away.

The early reviews on The Last Jedi look good so we have very high hopes for this film.  Given all of the anticipation, I got to thinking about Star Wars and realized that even after all of these years, Empire Strikes Back is still my favorite.  A few of the reasons why:

What was your favorite Star Wars movie? 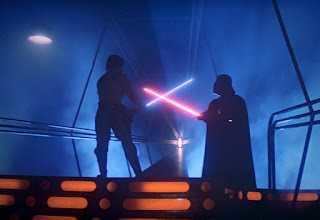