Dipping Into The New Year

Happy New Year’s Eve! For a Covid-safe New Year’s my family is staying home tonight, but we decided to make it special, so we’re throwing ourselves a dip party. If you haven’t heard of it, basically it’s a trendy idea where everyone who comes to a party (or in our case, just us) brings a different kind of dip and stuff to dip it in, and then the whole party is just fondue style-eating. Personally, I love dips and think they’re incredibly versatile, so I thought this was such a fun idea for us. We’re making things like Taco dip, hummus, guac, spinach & artichoke dip, and then for dessert we’ve got dipping chocolate and I’m making vegan caramel dip. I love the idea because in a normal party setting, people can bring their favorite dips, potluck-style, and it can take you out of your comfort zone of normal stuff you’d make.

I was talking to my mom about this idea, and we were talking about other food theme parties that would be fun. One of my ideas was a soup party. I would like to eat my whole meal through a straw (kidding). But in all seriousness, I think soup is a seriously underrated food group, and there are so many different kinds of soup and they’re all so good. No one every claims that “French onion soup” or whatever is their favorite food, but soup always slaps when you order it. As long as you own enough bowls, it would be such a fun party.

My mom’s idea was to have a crostini/bruschetta party, mostly because she has a thousand delicious-looking crostini recipes saved in her recipe binders, and she struggles to find opportunities to use them. So this party theme would give her an excuse to break those out. Plus, who doesn’t love “stuff on bread”? And, it can also be dessert-ified, which only adds to the theme.

Hopefully in the new year, we’ll be lucky enough to be able to have many safe parties, and then we can break out all the fun themes. But for now, we’ll be dipping tonight and cheers-ing at midnight. Hope you all have a wonderful New Year’s Eve! 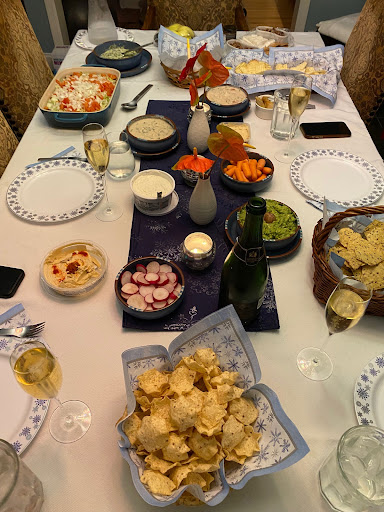 Posted by 4CallingBirds at 8:44 PM