Dying At The DMV

For reasons that I won't get into, I had to venture into the local Department of Motor Vehicles office today.  For your sake, I hope you don't have to go there -- ever.

Without a doubt, this was one of the saddest places on the planet.  Everything was old and falling apart.  Ceiling tiles were missing or actually dangling from above.  The floors were dirty.  The rows of benches were so beat up that even homeless people would snub their noses before thinking about sleeping there.

At the doorway, I was met by two police officers who asked if I had an appointment.  When I said "yes", they asked to see my confirmation.  Once they were assured my papers were in order, one of the cops escorted me into the DMV and checked me in on a kiosk that was the only thing in the room that didn't look like it had been around since the last millennium.

After checking in, I was told to sit on a bench and "watch the board" -- which was an old fashioned LED board with two rows of numbers.  One was my ticket number (secured from the check-in kiosk) and the other was the number of the service window.

Then the wait began.  So glad I had a reservation.  I sat.  People came and went.  They seemed to be served at a fairly strong clip but without knowing where you stood in line, the only thing you could do is sit there and read your phone (which everyone in the room seemed to be doing) until your ticket number showed up on the big board.

There was litter and -- no joke -- tumbleweeds of dust all over the floor.  All we needed was a slight breeze and they would have blown across the prairie.

Finally my number made the board and I made a bee-line to my service window.  Five minutes later, my business was done and I picked up my pace as I headed for the exit -- hoping beyond hope that I would be able to leave and not be locked in this purgatory until the end of days.  Luckily, the gods smiled on me today and I was soon back in my car, pulling off my mask and thanking the lord that I didn't have to work in a place like this.  To those that do, I thank you for your service and hope there's a special place in heaven for all of you. 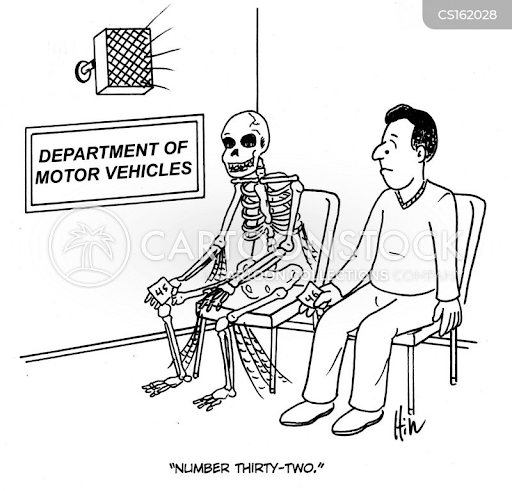 Posted by 4CallingBirds at 3:24 PM