The Things We Remember From Our Youth

A few months before the pandemic began, my wife and I were traveling upstate with some friends and we ran into a high school classmate of mine who I hadn’t seen in 30+ years.

We first met at summer camp when we were kids and then later went to high school together.  We were always friendly – more friendly when we were at camp together.  In high school, we ran in different circles and didn’t really hang out.  All of these years later, it was very good to see this guy.  We chatted for a good long time and caught up on what each other had been up to for 30+ years.

At some point, this friend turned to my wife and said “He was always nice to me, even when he had no reason to be.”

That really stuck with me.  The fact that so many years later without any contact at all, this is the lasting impression I had made on this guy.  I can’t for the life of me recall anything specific that I may have said or done to this guy to leave that impression – but I’m glad I did.

Having this experience with this classmate made me reflect on memories of my childhood.  I wondered if anything like that stayed with me over the years.  And I realized there was.

There was a guy I’ll refer to as “A” who I knew since elementary school.  He was a great athlete, was very popular and for whatever reason, we became friends.  Back in elementary school, at recess we would play pick-up softball.  Everyone would bring their baseball gloves and when recess came, we’d go outside, two captains were chosen and they would alternate picking from among those who were playing that day to select teams.

A was always one of the first people chosen.  They all wanted him on their team.  Our captain that day was a kid I’ll call “C”.  We lived in the same neighborhood but were never really pals.

I enjoyed playing the game but was not that good at that point.  As usual, I was one of the last people to be chosen for the team.  C made a batting order and, no big surprise, I was last in the order.  Also, no big surprise, A was batting 4th in the cleanup position.

We took the field first and held the other team from scoring.  Three outs later, we headed in to take our turn at bat.  While the first one or two players were batting, out of the blue A said to me, “you should bat in my position.”

I was surprised and also scared to death.  What if I struck out?  This could be horrible.

A told C that he and I were switching positions in the batting order.  At first C thought he was joking.  When he realized that A wasn’t, he said “no way”.  A insisted that we switch.  C again said no way.  He was the captain and he wasn’t going to have me bat 4th.  So A, way too calm and collected for an elementary school student, told C that if he didn’t let me bat 4th, then A just wasn’t going to play.

Oh snap!  Nicely played.  C didn’t want his first round pick to skip the game entirely so he relented, despite being majorly pissed off at A.

When it was my turn to bat, I got a single which was ABSOLUTELY FINE.  I didn’t disgrace myself.  And I didn’t make A regret his decision to take a stand on my behalf.  I don’t recall exactly what happened when A got up to bat a few players later but I remembered that we won the game.  This guy did something super nice for me.  He didn’t need to.  I would have bat last and things would have been no different than the day before or the day after.  But he did.  And that made a big impression.

Like my friend from upstate, A and I drifted apart in high school.  We would say hi in the hallway but that was about it.  After high school, we lost touch.  It wasn’t until years later that I learned that he had been killed in the 9/11 attack at the World Trade Center.

It would have been nice to look him up so many years later and tell him what an impression he made on me at that recess many years earlier.  While I never got the chance, it is something that I have and always will carry with me. 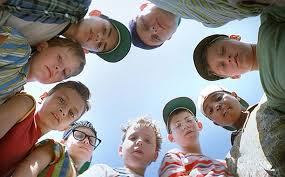 Posted by 4CallingBirds at 2:40 PM