The Journey of Several Lifetimes in One Second

Today I want to share with you a cool experience that I have had twice over this last week: I have travelled back in time to another century and another generation.

The first trip was to the 1930’s Industrialized America.  There, I met seven ragtag pipefitters.  All of them were in torn or tattered work clothes; and absolutely everybody wore a hat.  Beneath their burley mustaches, two were nursing cigars, one a corn cob pipe. (Who knew anybody besides Frosty actually used one of those?) The men are all lined up symmetrically and posing for a camera, complete with pipe thread cutting dies and wrenches centered perfectly in front of them like a giant X.  They clearly worked hard, were proud of their profession and well-seasoned at that.   I saved the best part for last: the clean shaven man peering from around the back of the group looks an awful lot like my father; in fact, he is my paternal grandfather whom I never met because he died over 20 years before I was born.

While I will never know my grandfather, the cool thing about old photos is we can really study them and almost climb into them much like the storied Mary Poppins and her paramour Bert jump with both feet into Bert’s chalk sidewalk drawings.  Once inside, everything comes alive with explanation.  Heavy clothes means the pipefitters spent a lot of time working outside in the elements.  Worn shoes reveal they were probably men of little means.  From their collective stance they all seem strong and content.  However, they each have different facial expressions – matter-of-fact, smirky, serious, and my grandfather with a soft smile.  Of course out of each observation grows even more questions…did these men like each other?  Would they go to the local pub after work and grab a beer?  Did they spend their lives working as pipefitters and were they happy about it or was there something else they’d prefer to do?

The second trip I took this week was to New York family life in the 1940’s.  You see, a distant cousin of mine wrote a song and created a video as a tribute to 8 sisters from Italy who grew up in the first half of the 20th century.  One of the women is my cousin’s grandmother; another is my grandmother.   Eight sisters growing up in one small house in New York City.  Two generations later, we are blood relatives that don’t even know each other.  This time through the photos of our common ancestors, not only are we connected to them and the little details of their lives, we are connected to each other.  From our parents we have been told different stories and therefore different parts of the pictures speak to us but always the one thing we have in common is the knowledge that at some point we came from the same place and the same time.

So twice this week I have been brought to places I have never known, but yet were still simultaneously familiar.  Every piece of information one gleans from his/her past is a part of ones’ self -discovery.

Thanks for traveling with me. 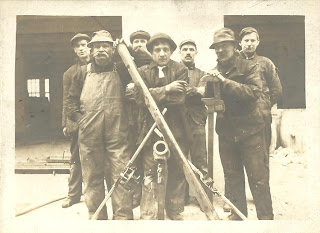 Posted by 4CallingBirds at 4:58 PM