Today the idea of language has been on my brain, partly because I just finished editing my Spanish homework, and also because I just picked out my courses for next semester, and one of them is a new language for me.

In high school, I took Latin and found it to be pretty easy to grasp so I thought that I might be some kind of language aficionado. I decided to take Spanish in college, because I felt like an uncultured white girl whose extent of knowledge of one of the most common languages in the world was limited to what I had picked up on Dora. However, I found Spanish to be a lot harder than Latin, although it is grammatically very similar, because after the first couple weeks of Spanish, the class starts to be taught entirely in Spanish. Which is a language I barely speak. Hence me taking the class.

I thought about how Latin was so much easier because it’s taught in English, presumably because the only guy who actually uses spoken Latin works for the Pope, and I don’t think he does a lot of casual chatting. Another side effect of Latin being a dead language was the entirely different set of vocabulary, which is an interesting reflection on how a language grows depending on the time period in which it’s used. In Spanish, I learned lots of modern vocab for vehicles and technology, while in Latin I learned 20 different words for battle and attack, because it seems the Romans just waged war on everybody all the time.

The third language that was on my brain today was Sign Language, because I decided to take an introductory sign language course this Spring, for no reason other than it’s cool and also helps the world be more inclusive and accessible. However, based on the analysis that I just went through, I can’t decide whether it will fall on the easier or harder side of things. On the one hand, it is a modern language that is still used today, so there is more “vocab” to learn. But at the same time, it is technically a different form of American English, and as far as I know there aren’t really verb tenses, and I assume that it will be taught in spoken English the whole time, and that we aren’t going to have a silent Zoom class starting a few weeks into the semester.

I think that Sign Language is an important and very different language, mostly because hearing people can theoretically all learn different spoken languages if they had to. Like, if someone dropped me in the middle of China, I would definitely struggle to learn a whole different language and alphabet, but I would probably be able to figure it out eventually. Deaf people don’t really have that option, because they can’t just start to hear different languages. Sure, they could learn different types of sign language (in fact, I know the sign for “Australia” in both ASL and Australian sign language), but unless others are talking with their hands, they are living at a disadvantage, through no fault of their own. I personally think sign language should be taught in younger schools too, because it’s easier to learn languages when you’re younger, and it would help some people feel a lot less isolated. Also, it is cool to be able to talk without your voice. It’s like a step between telepathy and spoken word, and who wouldn’t want a quasi-super power? Overall, I think languages are very important in connecting people throughout time and place, and I look forward to seeing what that class has in store for me. 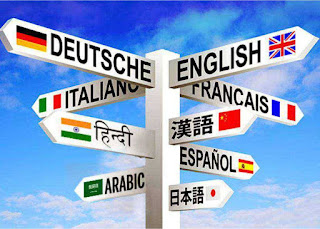 Posted by 4CallingBirds at 8:11 PM