Merry Christmas to all those who celebrate! To those who don’t, happy Friday! Recently I have started re-reading the Harry Potter books at the same time as my best friend, book-club-style. So I decided I’d rank the books/movies based solely on my own opinions and no actual rating scale. Disclaimer: this is my own personal opinion, and it is entirely objective, so please don’t be offended if your favorite is not my favorite. Also, there will be spoilers, but if you still don’t know them by now, that’s on you and you should be ashamed of yourself.

In last place is the Chamber of Secrets, or Book 2. It’s actually not bad, and there are some story development backstory things that are important to the overall plot, like meeting Tom Riddle, but overall the other books/movies had standout things that made them better.

Sixth place goes to the Order of the Phoenix. While again I very much enjoyed this book/movie, and I liked seeing the characters interact as normal teenagers and not constantly stressing about Voldy, I absolutely loathe Dolores Umbridge, and that book was 870 pages, the longest I’ve ever read, so the stuff that they cut for the movie was a big extraneous from what I remember. The main enemy is “lawful evil”, so there are a lot of frustrating dystopian vibes. Also, there is no reason that Sirius had to die, other than the screw up Harry even more than he’d already been traumatized.

In fifth place is The Sorcerer’s Stone (or Philosopher's Stone if you’re not American), because it, similar to Chamber of Secrets, lacks the excitement or drama that I so enjoy. However, it has a special place in my heart as the beginning of this magical story, and the score is magnificent. “Leaving Hogwarts” makes me cry every time, and John Williams deserves all the awards.

Deathly Hallows (I’m counting Parts 1 & 2 together) comes in fourth. The first half of the book, or Part 1 of the movies, leaves something to be desired, because they’re basically just camping and being emo for no reason. However, I think that the second half makes up for it, because of the awesome final battle. I love how in the movie’s final battle there are different obstacles that we see that represent each of the prior books, and I get chills when Aberforth shows up and also like 8 other times. I will say again, Fred did not need to die, and neither did Dobby, and they both hurt me so badly and I did not appreciate it.

The Half-Blood Prince is in third for me, which would’ve been a surprise to me from a few years ago. When I first read the books, I would have probably put this one as second to last, but rewatching it in recent years has me viewing it in a new light. The movie is not the greatest adaptation out of all of them, but it’s so fricking funny that I don’t even care. The plot is a good leadup to the last book, and I like the teen drama because it feels very realistic.

Second place goes to Goblet of Fire. I feel like this book is really where the series starts to take a turn to a darker place, and it’s all downhill from here, but overall I loved the introduction of other schools that we hadn’t really seen previously. Also, I appreciate a good plot twist, and as much as I liked Cedric, his tragic death really set the tone and showed the real spoils of war. Plus, I appreciated how he was someone who was liked by all, and therefore sort of united Hogwarts which had been previously so divided.

And of course first place goes to Prisoner of Azkaban. I loved both the book and the movie: Alfonso Cuaron’s cinematography was beautiful, and the actors really looked the most like I felt they were written in the books in this one. Also, the time travel aspect was perfectly executed, and I liked that Voldemort was a non-issue in this one. Also, we got to meet Lupin, who I wanted to be my teacher so much, and we got yucky Snape in granny clothes , so what more could we ask for? (To be clear, I LOVE Alan Rickman but Snape is the worst and I will die on that hill). I love the Marauders’ backstory, and Harry learning more about his parents through one of their best friends was so cute.

To reiterate, these are my personal opinions based on re-reading and re-watching the books and movies like 10 times each, and also consuming a lot of internet discourse about Harry Potter. Hope I don’t start an internet war with this, and with that, I bid you adiec. Merry Christmas to all, and to all a goodnight! 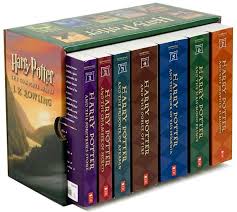 Posted by 4CallingBirds at 5:54 PM