I watched the finale of the second season of the Mandalorian last night and really enjoyed it; I recommend it to you and yours.

One thing I was thinking about while watching it: why don’t the Jedi use the force more? I’m sure there’s a true hardcore fan explanation involving midi-chlorians and abstract lore. But every time I watch a Star Wars Jedi fight this thought pops into my head. Jedi have a superpower that’s basically telekinesis backed by religion yet most Jedi fights you see are 90% lightsaber.

The one exception to this of course is the fight between Yoda and Count Dooku in Episode II. They basically lob large structures at each other with the force and forgo their lightsabers. And frankly, it’s the coolest Jedi battle in the whole series. May the Force be with you, but apparently not during lightsaber battles. 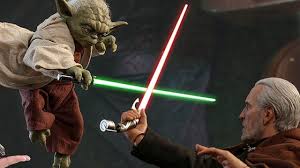 Posted by 4CallingBirds at 4:36 PM