I’m trying to be optimistic about the next administration and climate change. They seem committed to taking real action. If history has taught us anything it’s that to get anything done politically, it needs to become a dick measuring contest. Right? Because the only reason we went to the moon was because Russia was like, “We can get to the moon before you!” and the US said, “Nooooooo!” and then we got ourselves to the moon. The Cold War was just the US and Russia being like,

US: I have a bigger bomb than you.

Russia: No, we have bigger bombs.

US: We have more than you.

Russia: We could totally blow you up.

US: Then prove it.

Someone just needs to send a memo out saying that whichever world leader takes the most aggressive action against climate has the biggest penis. I swear to you, Putin will start building solar panels like his heterosexuality depends on it.

Whenever I get pessimistic about climate change I always try to frame it in my head that we’ll just be living in a future science fiction movie dystopia and I really like science fiction movies. Climate change is just real science fiction. Science nonfiction. I would have preferred more of a Star Trek future, but it looks like we might be heading more in the direction of Mad Max. Would’ve been nice to have a future where a diverse group of people in monochrome uniforms explore space but we might have to settle for racing in the desert while playing heavy metal and looking for water. The worst part of a Mad Max future is the heavy metal isn’t it? I think car races are cool and I’m not too crazy about water, but heavy metal sucks. 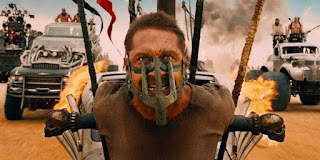 Posted by 4CallingBirds at 5:59 PM