What qualities should determine a person’s salary? One could probably argue some combination of the amount of work done, the quality of the work, and maybe unique skills that the person brings to the table. Jeff Bezos is probably a smart and skilled enough guy but he is not multiple billions times as smart or skilled as someone making minimum wage in an Amazon warehouse. He definitely does not work billions of more hours than someone working in a warehouse. Because that would be impossible. A billion hours is over 100,000 years.

We tend to lump millionaires and billionaires together because the words sound the same, but one cannot overemphasize how vast of a difference in quantity there is. Right, because a million seconds is about 11 days. A billion seconds is over 30 years. So if you counted out every dollar that Jeff Bezos has, and it took one second to count every dollar, it would take roughly 5,595 years. That many years ago, Rome still hadn’t been founded yet. Jesus Christ would still not have been born for another 3 thousand years. That’s longer ago than the pyramids. And remember, that’s not a dollar for every year, that’s a dollar for every second. What?? If we went back a dollar for every year we would be way past the creation of the universe. This is all a long-winded way of saying that having that much money is immoral but I will not believe that anymore if Bezos pays me not to. 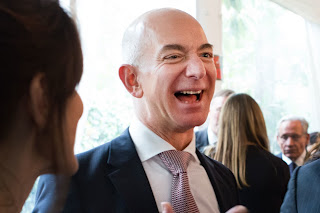 Posted by 4CallingBirds at 4:56 PM