Frosty's Review of "A Beautiful Noise"

My family and I saw the show "A Beautiful Noise" on Broadway tonight.  It is basically a musical telling of the story of Neil Diamond's life using his music. We enjoyed the show a lot.  The performances were very strong and the ensemble was used very well throughout the show.  Will Swenson, as the younger Neil Diamond definitely stood out.  His performance is such a spot on imitation of Neil Diamond that I wonder if they would ever be able to find a replacement if Will Swenson leaves the show before it closes.

There were several key takeaways for me personally that I thought were worth sharing:

First, it became apparent to me watching the show that there is a lot of Neil Diamond's music that I DON'T know.  Surprising, right?  The guy had 39 songs that hit number one on the charts.  There were plenty of songs that I did know, of course, including several that I more closely associate with the artists that originally recorded them than I do Neil Diamond.  I looked it up and Sweet Caroline was released when I was only 3 years old.  That song I know but there were many others performed throughout the show that I was unfamiliar with.

Second, I didn't know that Neil Diamond suffered from depression.  In fact, the framing device for the musical is sessions between Diamond and his therapist.  Apparently he has dealt with the "dark clouds" since his childhood.  Who knew?

Speaking of "who knew?", I also learned (courtesy of a letter from Neil Diamond in the Playbill) that he retired from performing due to a 2018 diagnosis of Parkinson's Disease.  Maybe more diehard Neil Diamond fans in the crowd were aware of this but I sure wasn't.

The show is a colorful, interesting telling of an interesting life filled with some/lots of music you will recognize depending on your level of Neil Diamond fandom.  If you are in New York while it is playing (and you have already seen Some Like It Hot which was definitely superior), I would recommend it. 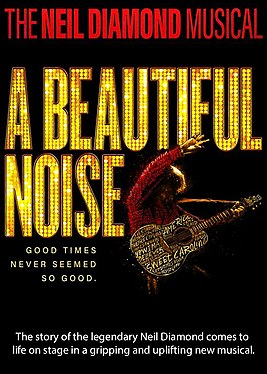 Posted by 4CallingBirds at 8:08 PM