At the end of every year I get so excited to see my Spotify Wrapped statistics, and I love seeing other peoples’ when they post them on their Instagram stories.

They always include some classics stats, like Top 5 Artists, Top 5 Songs, Top Genres, and how many hours you listened to your top artist. But they also try to come up with new and creative facts to include about your Spotify algorithm. This year they included my “audio day”, which I’ll attach a screenshot of. 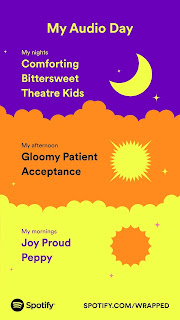 I thought this was such a strange choice of analysis to include, and while they certainly did capture some of my musical moods, mostly I just didn’t understand what this was supposed to tell me about myself.

Regardless, I usually have a good idea of what my top songs are going to be, because I go through phases of weeks or even months where I’ll listen to the same song or few songs over and over until I eventually move on to the next one, so I can often predict which ones will be included. My number one song this year, “Blame It On The Boogie” (the version from Pitch Perfect), was unexpected, because while I did listen to it a lot, I thought there were others I listened to more. But I realized it’s because the song itself is so short that I was able to get more plays in. Conversely, I listened to Mirrors by Justin Timberlake on repeat for most of the summer, so I expected that one to be in my top 3 for sure, but it ended up being #6 because the songs is 6 damn minutes long, so it didn’t ultimately get as many replays.

My Wrapped algorithm is very important to me, which is why when my parents ask me to put on some background music when we have people over for dinner, I’m happy to do so, but I always ask if I can put it on from their phones so that whatever music I play doesn’t affect my algorithm. My dad ended up with some random pianist as one of his top artists this year because of ambient music like that, so I’ll be sticking to my guns on this rule for myself.

I spent 21,821 minutes listening to music this year (2,631 of which were Harry Styles of course), and I enjoyed every one of them. I always say I have weird music taste that is “not for public consumption”, but it’s mine and it makes me happy, and even though my Wrapped usually looks like it belongs to a 12-year-old girl every year, I still love sharing it with my friends.

Posted by 4CallingBirds at 7:49 PM