"A Christmas Carol" on Broadway

A few days ago my parents and I went to see the production of A Christmas Carol that is currently running on Broadway. If this were any old production of this show, it might not have been on the top of our priority list to see. This one was special.

The original classic Dickens story was adapted into a one-man-show, with seasoned Broadway actor Jefferson Mays playing all 51 characters in the story. My family has seen him in two other shows in the past, Oslo and A Gentleman’s Guide to Love and Murder (where he also played multiple characters, in that case nine different members of the D’ySquith family), and he had such range and ability in those productions that we knew we had to see him in this.

This show is a must-see for anyone who appreciates the artistry of theater. For one thing, any show that has only one actor is an impressive feat in and of itself because 95 minutes of material requires an obscene amount of memorization. Outside of that, Mays’ incredible range allowed him to play so many distinct characters. Even when he was having a conversation with himself as three different people, it was still so easy to follow which character was supposed to be speaking at all times.

Jefferson Mays’ mastery of performance went hand-in-hand with the brilliant lighting and sound effects of the show. Light was used strategically and smartly to help differentiate between characters. For an overall pretty simple set, the lights and sound effects filled in the gaps perfectly, and were used in creative and innovative ways without overtaking the acting and the story itself. Even the way Marley’s chains were portrayed, by Mays swinging his arms, a chain sound effect, and then a reverberating light pattern on the back wall acting like a visualization of the echoing sound, was so incredible and unlike anything we’d ever seen before.

For passionate theater goers looking for their next ticket this holiday season, I would 100% recommend trying to snag a ticket for this show before its run ends. A true masterpiece. 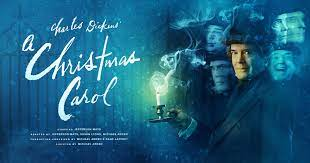