Two nights ago I went to the Cornell vs Harvard home hockey game. I’m a senior at Cornell but this was my first time ever attending this legendary event, so I was really excited.

I find that I never have more school pride than I do when we’re yelling out the most obnoxious chants toward the other team. And one of the traditions is for Cornellians to throw fish onto the ice at the beginning of the game. I personally brought Swedish fish because I had to stuff them in my bra to get them into the game (since they’re technically not allowed), and I didn’t want to smell like low tide all evening. But when the time came people threw everything from real fish to goldfish to Swedish fish to even octopuses onto the ice, which was kind of nuts but also just really fun to be a part of.

My friend who works at the rink says they’re still finding fish in the stands two days later, which sucks from that perspective, but it’s at least an expected tradition at this point.

I loved standing in the student section and yelling at the goalie of the other team with all my peers, and I’m really looking forward to the next game. Go Big Red! 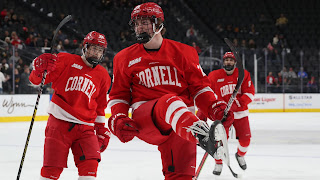 Posted by 4CallingBirds at 6:50 PM