At the beginning of COVID, I decided it was a swell time to make a Goodreads account, and now, I’m pretty into it. If you’re not familiar, it’s essentially a social media site for book lovers, where you can read and write reviews and track what you and your friends are reading. My favorite feature is that it lets you set a reading goal for the year and then it periodically will send you emails like “Hey, what are we doing here big guy? Not reading. That’s for sure”. It holds you accountable, which, God bless.

My goal for 2022 was to read 12 books for the year, which evens out to one book a month (idiot). And, wouldn’t ya know it, I am currently on book #12 and it’s the twelfth month of the year! So because I am an experienced literary creature, I’ve decided to share my top 3 books (of 12) I read this year.

Typically I read a lot of Sci-fi/Fantasy as you’ll see with the top two spots, but my other genre of choice is autobiographies by actors and comedians that I like. As an actor myself, I really appreciate these types of books because they help me see the larger journey and not get hung up on the small stuff. The Actor’s Life is that for Jenna Fischer (who you know from The Office), but it’s also a general instruction manual on how to go about pursuing being an actor. Obviously, that’s valuable to me. While every path in showbiz is different, Fischer’s is familiar; walking through it with her made the improbable feel possible.

This fun sci-fi novel is by the author of The Martian, which was famously adapted to film with Matt Damon a couple years back. Like that book/movie, Hail Mary is very grounded and can only be classified as “hard sci-fi”. It follows an astronaut who wakes up on a spaceship in another solar system with no memory of who he is or why he’s there. How’s that for a logline? Reader, it is good.

I really don’t want to spoil what the majority of this book is about, because I was caught completely by joyful surprise and I don’t want to take that away from you. If you’re not much of a reader (strange you clicked on this blog post), then I’m happy to report that this Weir novel is also being adapted to the big screen with Ryan Gosling in the lead. If it’s anything like how they adapted The Martian, I think you’ll be hearing about Project Hail Mary again pretty soon.

Babel, Or the Necessity of Violence: An Arcane History of the Oxford Translators’ Revolution by R.F. Kuang (2022)

This could be my favorite fantasy book I’ve ever read. I think I like sci-fi/fantasy because of its unique capacity for social commentary in a reskinned and foreign-yet-familiar context. When it comes to that, Babel takes the cake. It takes place in a version of 19th century Oxford in which a young Chinese orphan is recruited to learn “silver-working”, a complex magic system using silver bars and the gaps in meaning between different languages.

Interestingly, Babel reads more like historical fiction than it does a book of fantasy. Magic is present and it’s central to the story’s conflict, but despite the plot’s apparent similarities to Harry Potter, Babel is deeply political and a compelling investigation of “the necessity for violence” when destabilizing empire and white supremacy. In particular, I was impressed with how it touches on so much modern social justice discourse in a period setting in a way that felt completely natural and unforced. Yeah, I loved it.

Happy Reading to all! 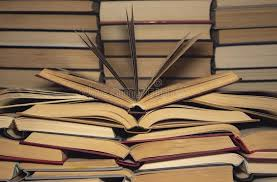 Posted by 4CallingBirds at 9:03 PM